Sights worth seeing in Val Gardena in the Dolomites

Nature has placed its most phenomenal landmarks in Val Gardena, but there is also plenty to discover for visitors interested in art and culture as well as nature lovers. Most impressive are the man-made creations embedded in the Val Gardena landscape such as the summit cross of Seurasas or the little church of St. Giacomo. 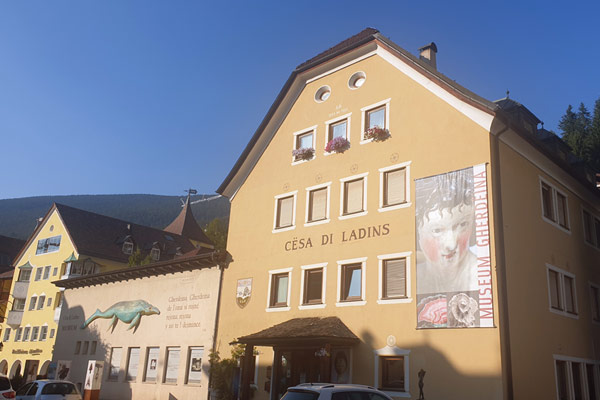 The Museum de Gherdëina – Museum Val Gardena in Ortisei spans two floors in the "Cesa di Ladins"; the museum of Ladin language and culture. During a tour of the museum, visitors receive insights into the nature and culture of Val Gardena. Old wooden toys, collected with great care and thoroughness by Joann Senoner Vastle, take visitors back in time between 1750 and 1940 and into the imaginative world of childhood. 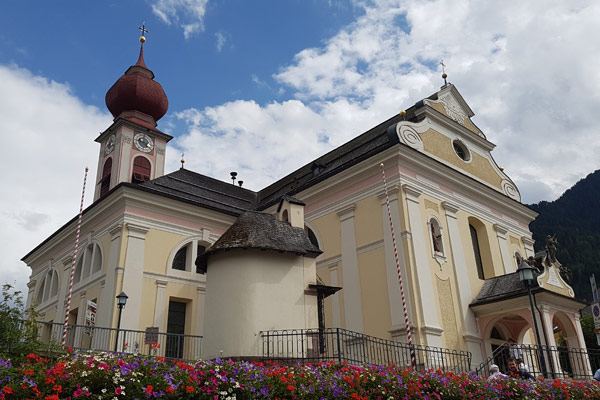 The parish church of Ortisei dates back to the late Baroque period and was extended at the beginning of this century by two additional side aisles. The interior is adorned with numerous paintings, statues and figures such as an enormous statue of St. Ulrich by Ludwig Moroder and the altar painting depicting “The Adoration of the Magi” by Josef Moroder-Lusenberg. The beautiful carvings decorating the pews are also worth looking out for. 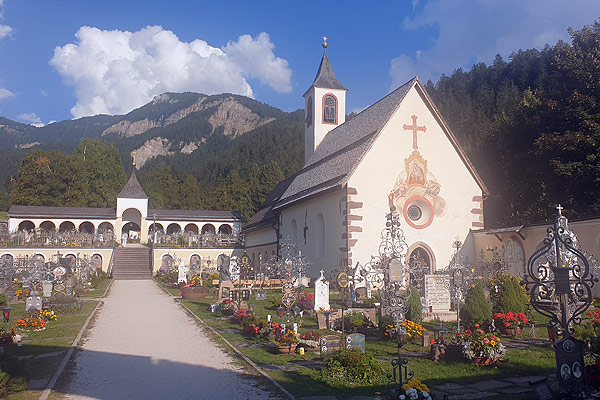 St. Anna’s Chapel, located in the cemetery of Ortisei, was built at the beginning of the 15th century and extended around 1515. The small, simple chapel features a noteworthy portal and several age-old graves and memorials that are worth seeing. 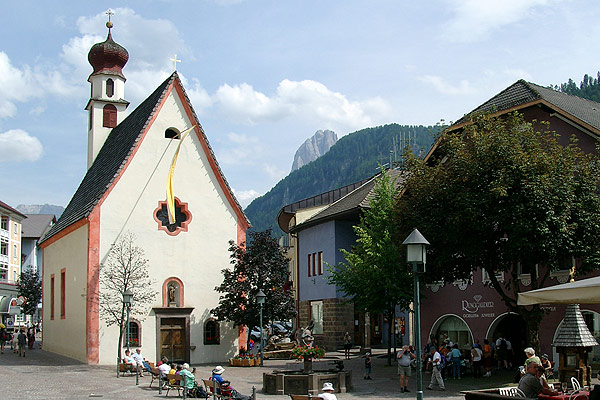 The simple and unadorned Chapel of St. Antonio ( built in 1673) stands on Ortisei’s main square and is a popular subject for photographers because of its pretty ridged turret. The altarpiece of the chapel’s patron saint, St. Antonio of Padua, painted by the Swiss artist Melchior Paul von Deschwanden in the Nazarene style of the 19th century, is also particularly interesting. 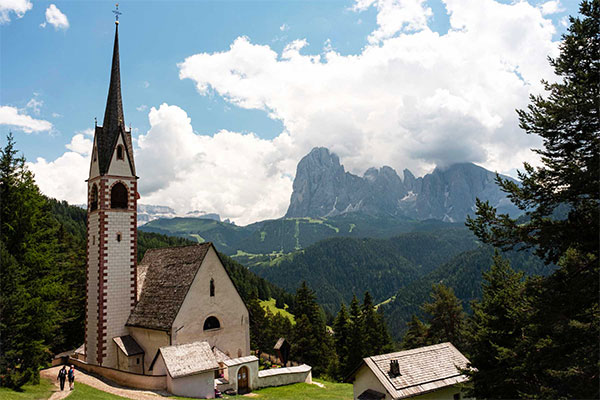 The Church of St. Giacomo (Dlieja da Sacun) is situated above Ortisei and is only accessible on foot. According to historical records, it is the oldest church in the valley and is dedicated to St. Giacomo, the protector of pilgrims and travellers. Situated in a picturesque setting, the church has a beautiful fresco cycle in its chancel, and baroque style sculptures can be found at the main altar; the original ones can be admired at Museum Val Gardena. The church's opening times are available from the Ortisei Tourist Information Office. 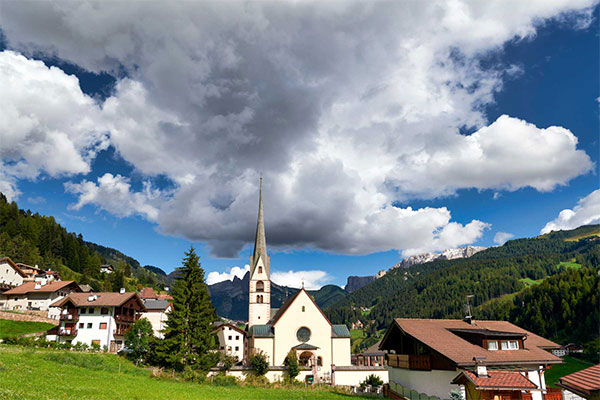 Santa Cristina, located in the centre of the valley near the ancient “Troi Paian” mountain trail, is the oldest parish of the valley. A chapel dedicated to St. Cristina is thought to have stood there since the end of the 12th century. All that remains of the Romanesque church, mentioned in a papal letter of 1342, is the bell tower which has been preserved as far as the eaves. Over time, renovations and additional structures led to changes in the church's original character. The chancel originates from the Gothic period, to which a polygonal charnel house was added in the 16th century. Worth seeing are the high altar surround, created by the famous Vinazer family of sculptors in 1690, and the bronze statue of St. Filomena in the charnel house, a classical style piece by sculptor Dominik Mahlknecht. 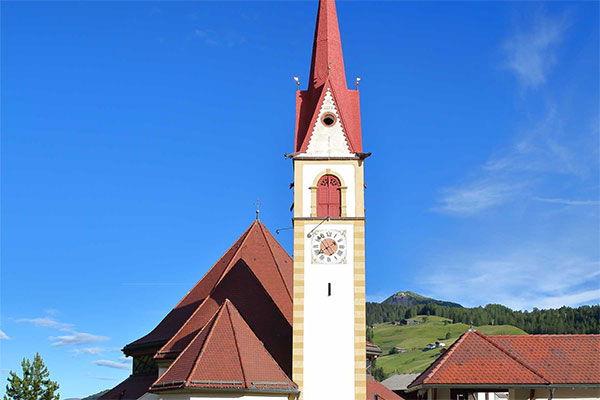 St. Maria’s Parish Church in Selva Gardena: the neo-Gothic nave dating back to the 19th century was demolished in 1988 and replaced with a modern octagonal structure. However, the beautiful chancel built in 1670 with its painting of the Madonna with Child by Lucas Cranach, has been preserved. In 1503, Wilhem von Wolkenstein had a chapel dedicated to the Virgin Mary built here, which had to be extended several times due to the number of visitors to this popular place of pilgrimage – which is still high today. A painted coat of arms belonging to the counts of Wolkenstein  can be seen chiselled into the outer wall of the sacristy. The painting at the high altar is a copy of Lucas Cranach’s Madonna with Child. 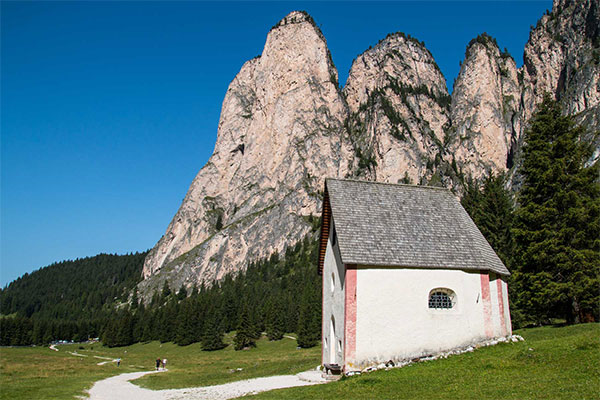 The tiny, charming Chapel of St. Sylvestro in Vallunga, is located within walking distance of the car park at the valley’s entrance. The chapel, dedicated to the patron saint of cattle, has been a much visited place of prayer for hundreds of years. During restoration work in 1993, 300-year-old frescoes depicting the life of Jesus were revealed. 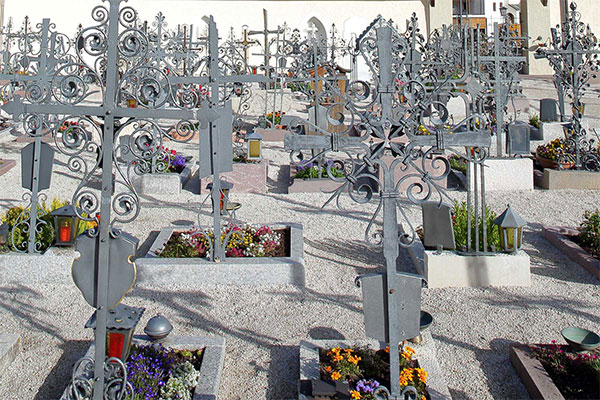 In Selva Gardena’s cemetery, a memorial chapel commemorates the mountain climbers who have lost their lives in the Val Gardena Dolomites. Their names are engraved in a large brass book. 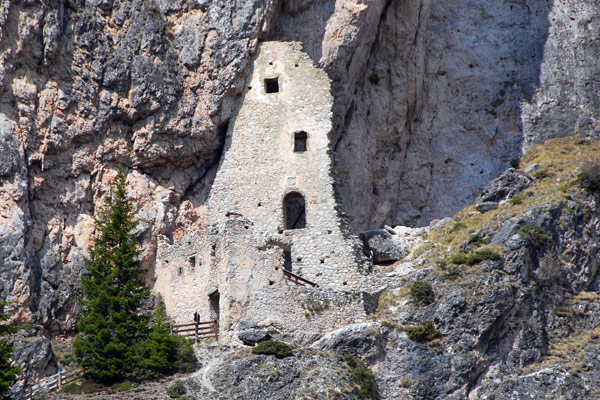 The ruins of Selva Castle (13th century) are dramatically perched like an eagle’s nest on a rocky cliff of Monte Stevia. A short, steep path leads there from Vallunga. 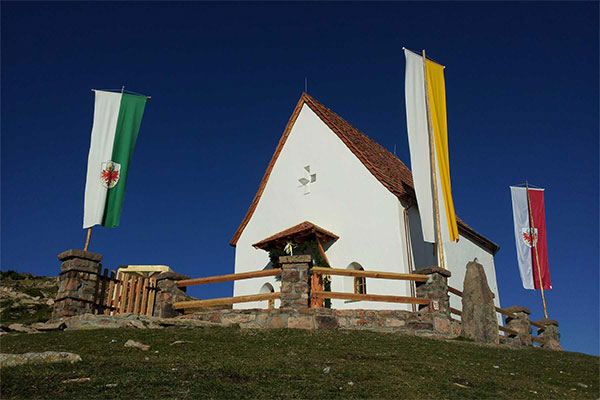 The Chapel of the Holy Cross on Rasciesa di Fuori, built in 1755 and at an altitude of over 2,200 m, is also worth visiting. 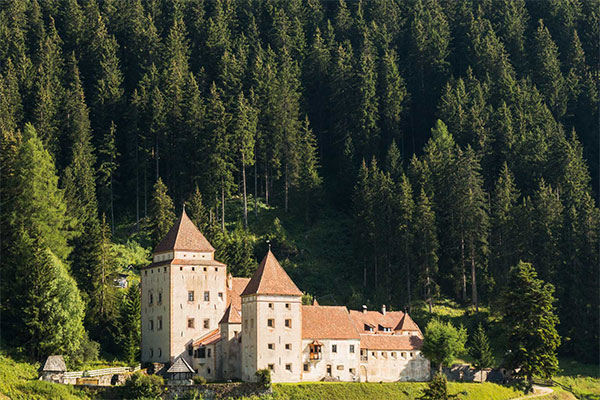 Castel Gardena, at the border of Selva and Santa Cristina, was built between 1622 and 1641 by Engelhard Dietrich von Wolkenstein-Trostburg as a summer castle and hunting lodge in the style of the Renaissance. However, its imposing proportions are more reminiscent of a medieval fortress. In 1863, Count Leopold von Wolkenstein -Trostburg donated Castel Gardena to the municipality of Santa Cristina to be used as a home for the old and the poor but, in 1926, it came into the possession of the Venetian Baron Carlo Franchetti and has not since been open to the public. 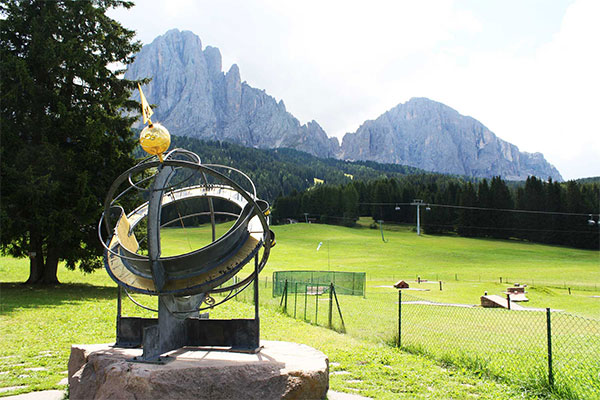 The Monte Pana Sundial - for astronomy and horology enthusiasts. A spherical equatorial sundial with a 2-metre diameter is located here, which shows the true local time as well as Central European Time (CET) for Santa Cristina and a further 60 towns.