Thanks to its top-quality hotels and apartments, as well as a breathtaking mountain backdrop, Val Badia is one of the most popular holiday destinations in the South Tyrolean Dolomites

Val Badia is situated in the middle of the UNESCO World Heritage Site's unique natural landscape and is therefore also known as “the heart of the Dolomites”. The valley begins at San Lorenzo in Val Pusteria and extends as far as the majestic Sella massif. With its five municipalities, Corvara, Badia, La Valle, San Martin de Tor and Marebbe, the valley is one of the most popular, well-known winter sport and hiking destinations in the entire Alpine region.
In winter, the Alta Badia ski resort in Val Badia offers 130 km of perfectly groomed slopes and 53 state-of-the-art ski lifts. Part of the Dolomiti Superski route and the famous Sellaronda, the Dolomites ski area offers endless fun on the slopes for both skiers and snowboarders, as well as families, beginners and experts alike. Stunning cross-country tracks, toboggan runs, winter hiking trails and ice rinks complete the scene for those who enjoy active holidays.
In the summer months, the Fanes-Senes-Braies and Puez-Odle/Geisler nature reserves, as well as the Sasso di Santa Croce, Piz Boè and Lagazuoi mountains invite hikers and climbers to the region. It’s also a true paradise for mountain bikers, thanks to Val Badia's many, well-signposted mountain bike trails and routes.
A perfect blend of tradition and modern life awaits in the land of the Ladin language and culture. Culture lovers will enjoy a visit to the Ladin Museum in the castle Ciastel de Tor, following the historical footsteps of the Dolomite Ladins as well as admiring the traditional, hand crafted costumes worn at various religious festivals, processions and parades. Furthermore, the ‘Viles’ – clusters of typical Ladin houses which line Val Badia’s hillsides, are also of particular interest.
Food lovers will be just as satisfied as those in search of active pursuits, or those seeking peace and quiet. In Val Badia, you will find traditional inns offering local and Mediterranean cuisine alongside impressive, renowned gourmet restaurants.
Look forward to an unforgettable holiday in one of the most beautiful holiday regions of the Dolomites. 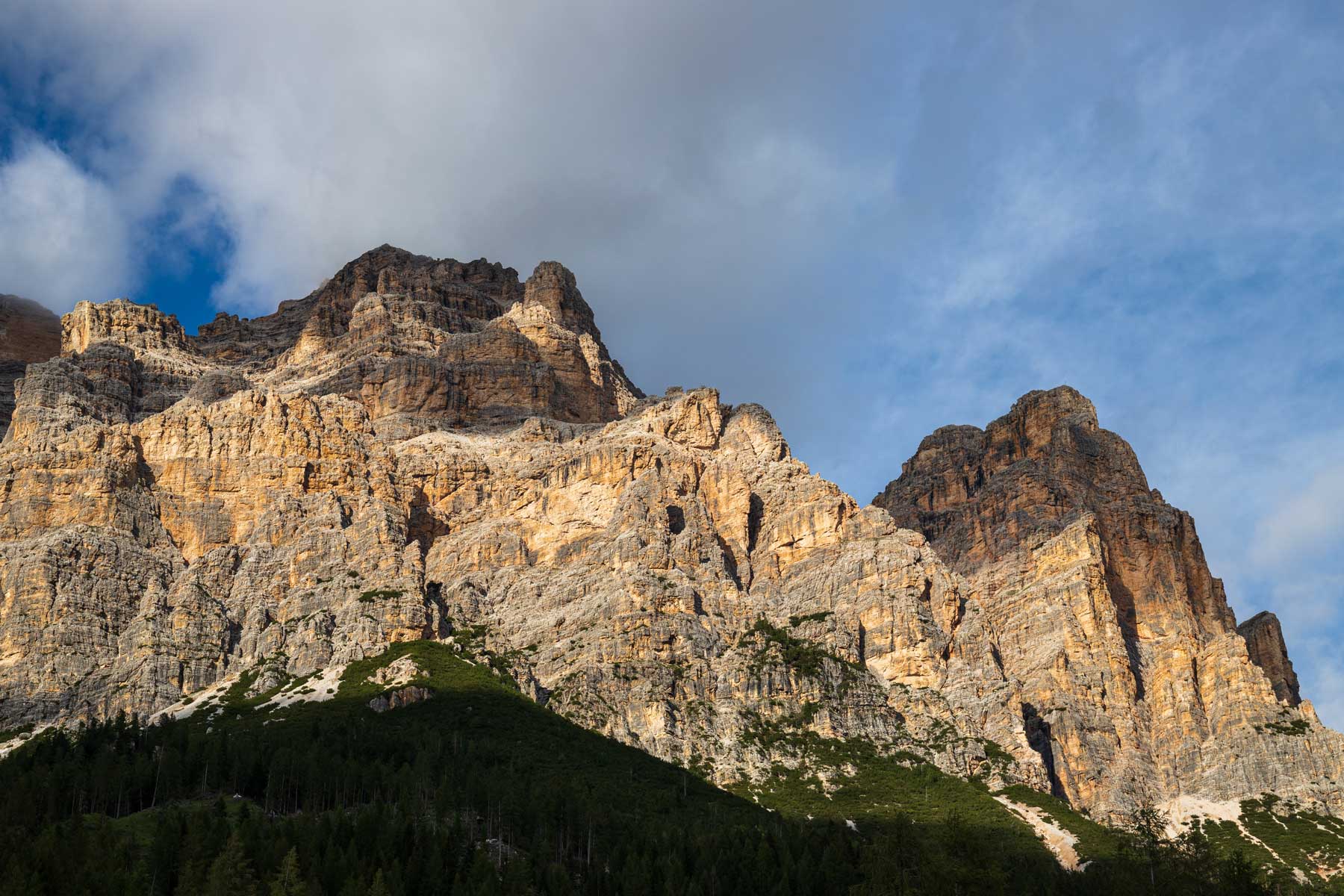 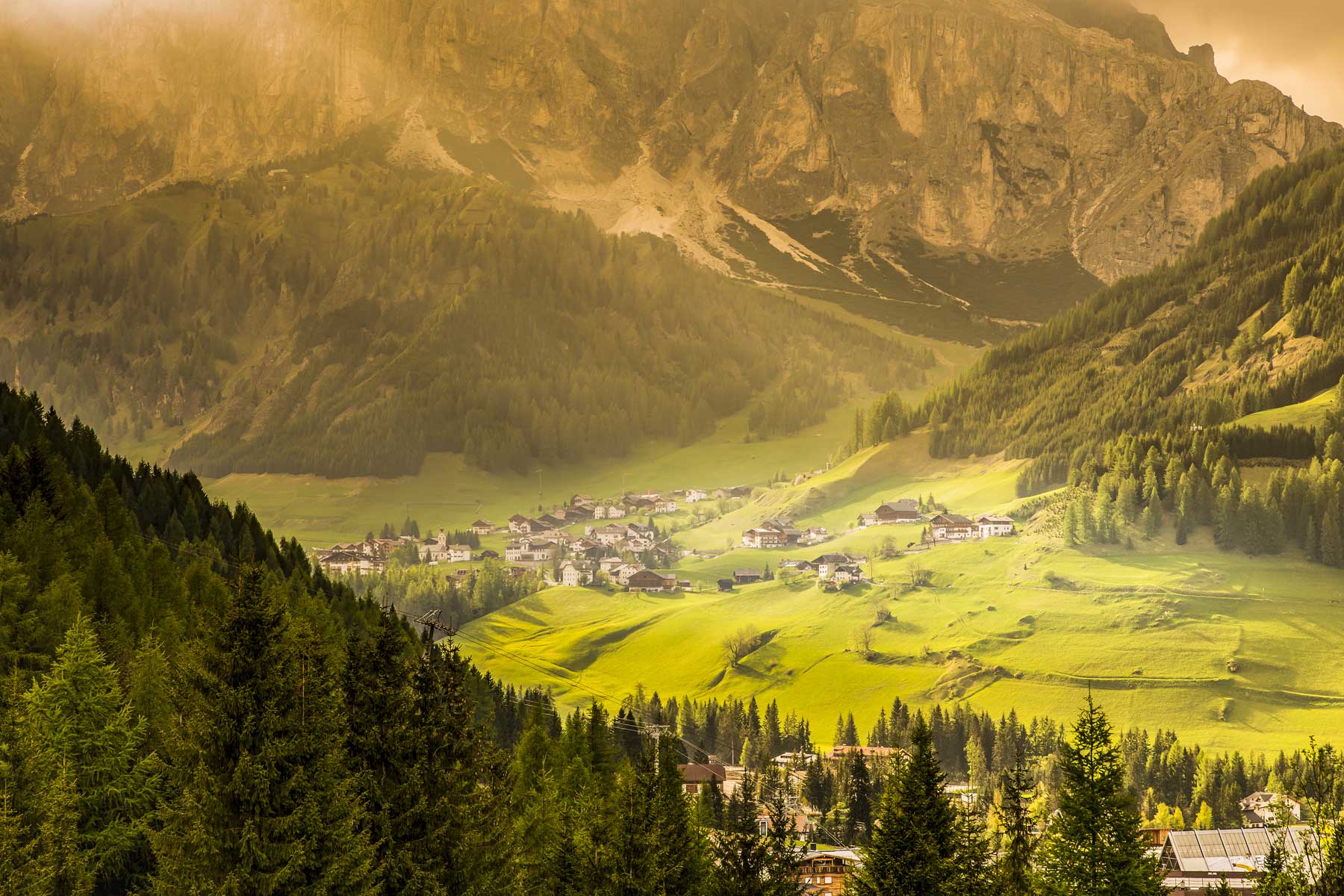 Corvara – 1,568 m
Corvara is situated at the foot of the Sassongher, in the middle of the world famous Sellaronda ski route and the unique natural landscape of the Dolomites. The imposing Sella massif, the Fanes group and the Puez-Odle Nature Park, all encircle the village, which is also known as the “cradle of tourism”.
Corvara offers a diverse range of sports and leisure options for families and those looking for an active holiday.
Winter sport enthusiasts can look forward to more than 130 km of slopes and amazing cross-country ski trails.
In summer, Corvara offers an extensive network of hiking trails and numerous mountain bike tracks, as well as a 9-hole golf course and various other entertainment options. 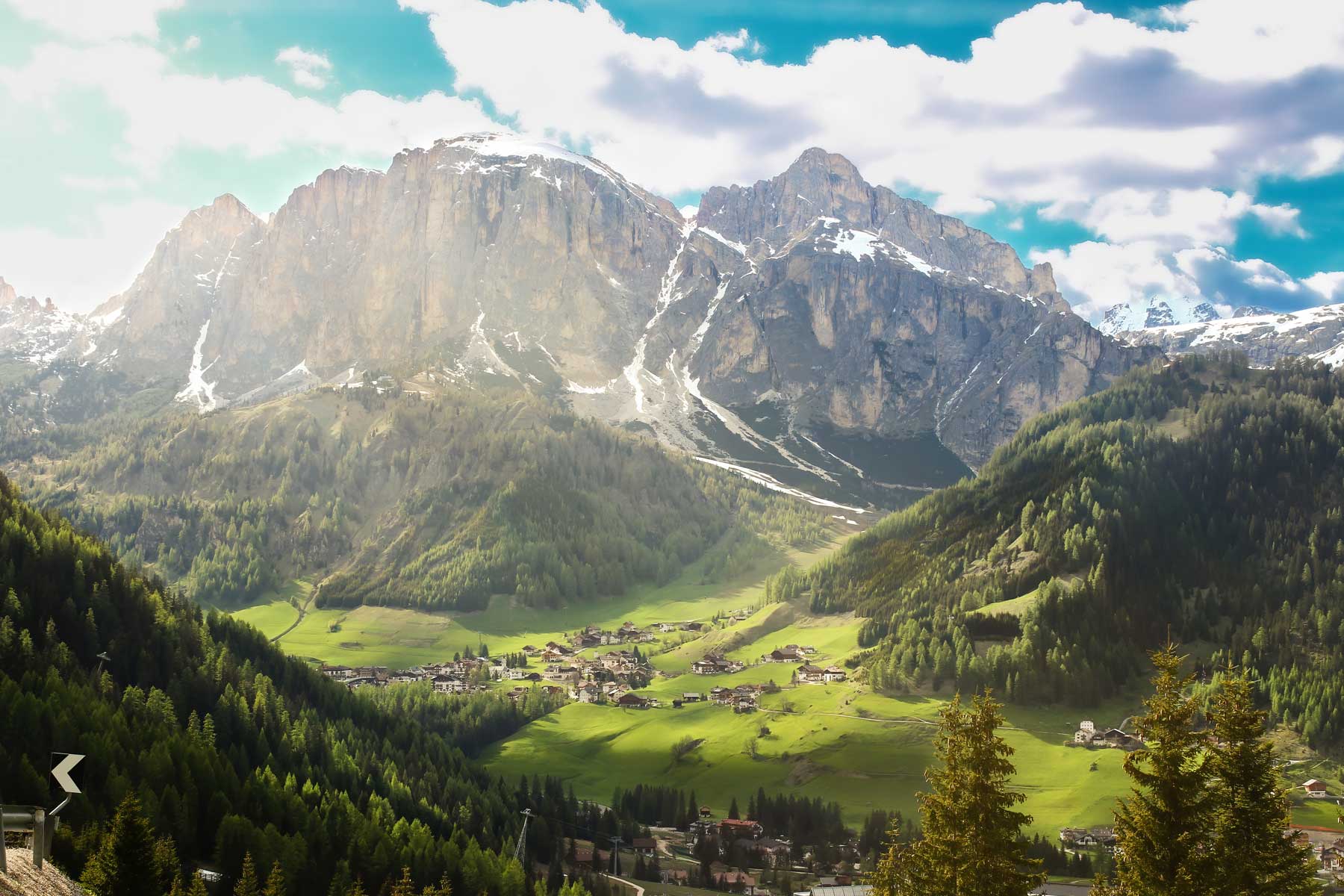 Colfosco – 1,645 m
At 1,645 m above sea level, Colfosco is the highest altitude holiday location in Val Badia. Due to its strategic position at the foot of the Sella group and on the edge of the Puez-Odle Nature Park, the village is a paradise for hikers, alpinists and mountain bikers, who take advantage of the breathtaking views provided by the unique peaks of the Dolomites.
In winter, Colfosco gives direct access to the famous Sellaronda ski route as well as the Alta Badia ski resort, which offers endless hours of fun skiing on 130 km of slopes.
After an eventful day in the mountains, the top-quality spa hotels in Colfosco invite guests to enjoy some well-deserved rest and relaxation. 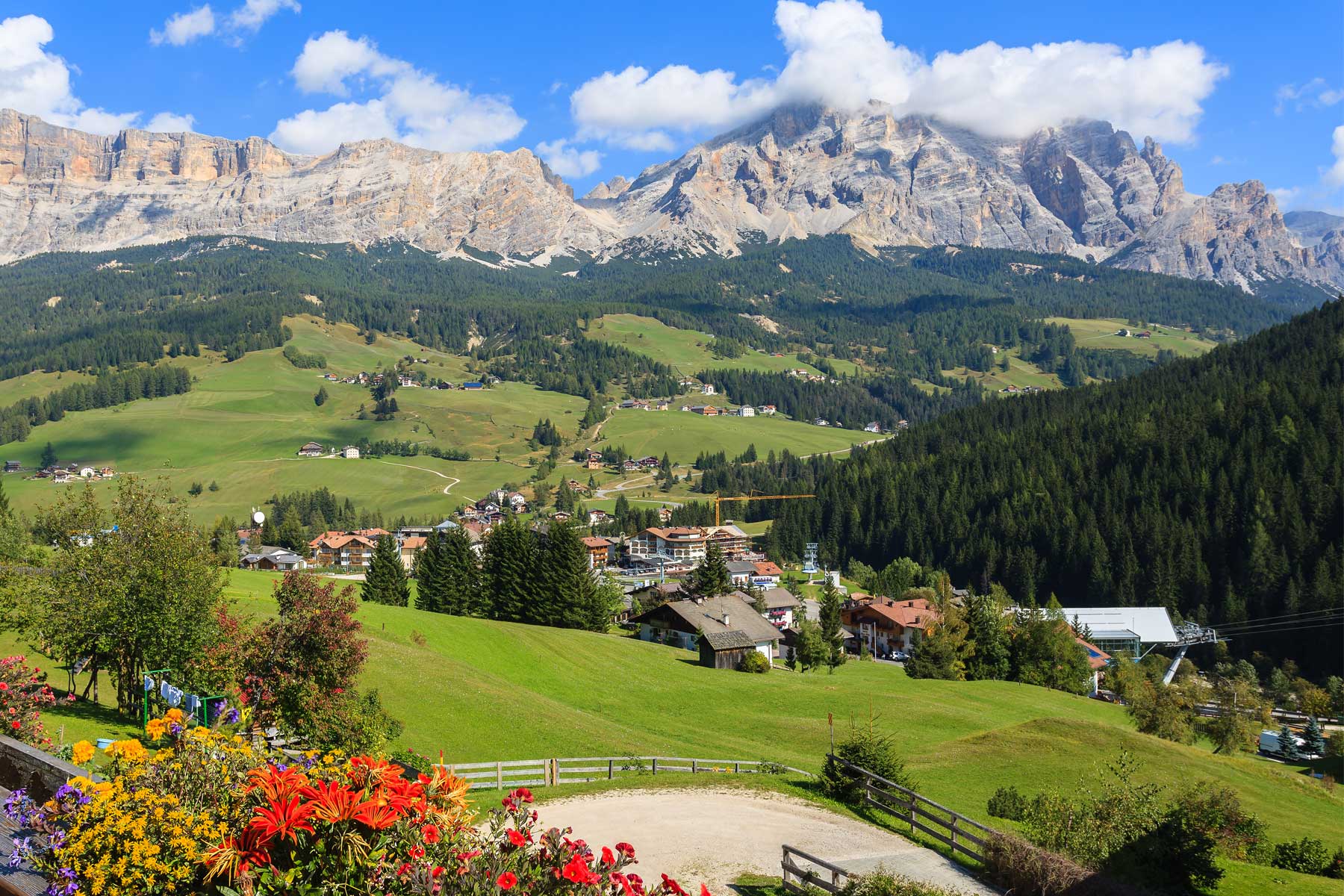 La Villa – 1,433 m
The mountain village La Villa is located in the centre of Val Badia at the foot of the Gardenazza and Piz La Ila mountains.
Surrounded by the natural parks of Puez-Odle and Fanes-Senes-Braies, this idyllic village in the heart of the Dolomites is a popular holiday destination for hikers and those looking for a peaceful holiday.
La Villa is also well known in the mountain biking world, as the famous, yearly bike marathon “Maratona dles Dolomites” starts here.
In winter, the village entices visitors with perfectly groomed ski slopes and welcoming huts offering Ladin and Mediterranean culinary delights. The Gran Risa slope, which leads directly into the centre of La Villa, also hosts the men's Ski World Cup races every December. 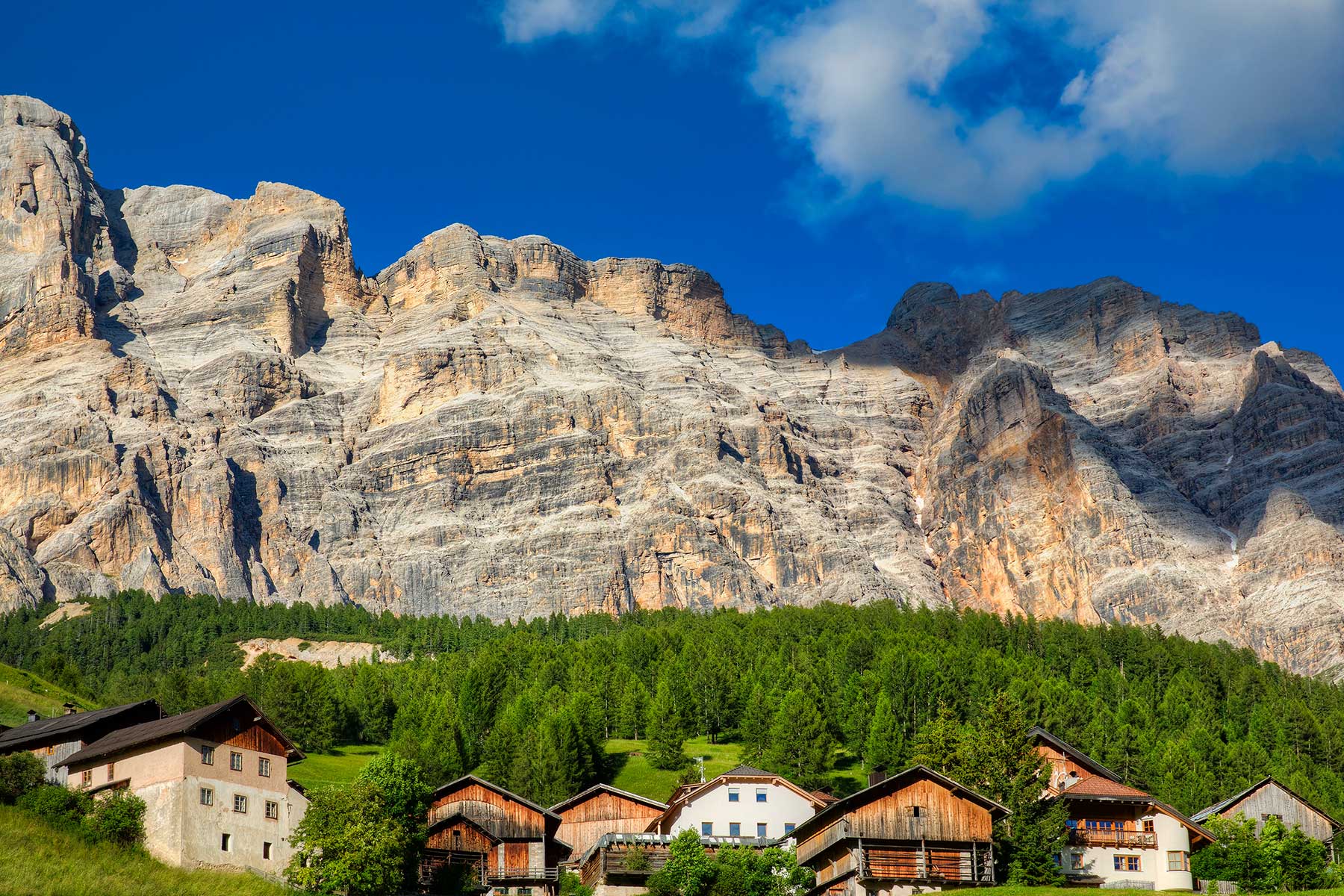 San Cassiano – 1,537 m
San Cassiano is located at 1,537 m and nestled between the idyllic peaks of the Fanes group and the  Pralongia pastures, which are great for both skiing and hiking adventures.
San Cassiano is not only a popular holiday destination for winter sport enthusiasts and climbers but has also made a name for itself in the culinary world. In the two multiple award-winning gourmet restaurants, diners can indulge in extraordinary culinary delights and quality wine.
Whether it’s an exclusive spa hotel, a cosy bed and breakfast or a family holiday apartment, San Cassiano does not fail to deliver the perfect holiday accommodation for any holiday in the Dolomites. 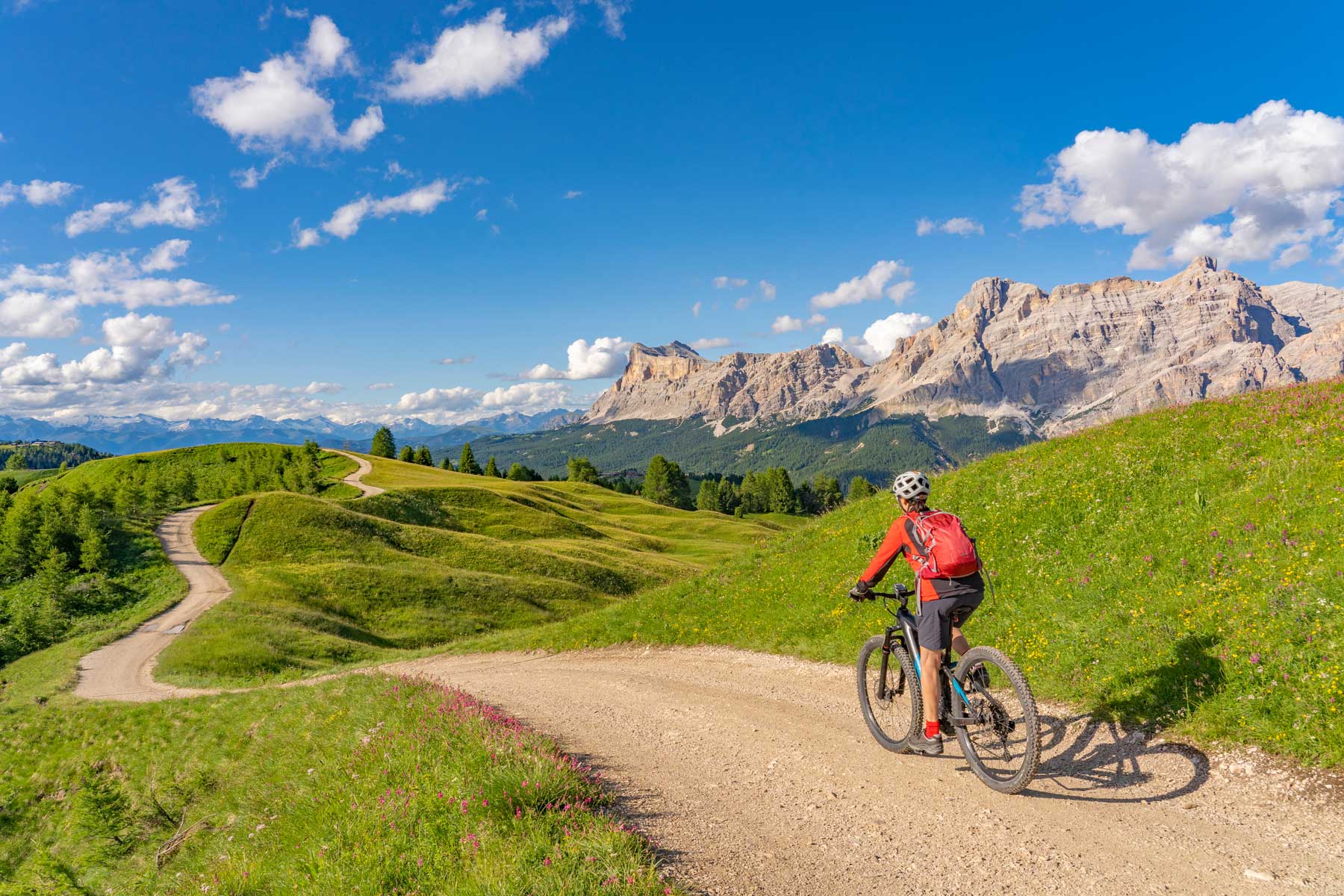 Badia – 1,324 m
Badia is an idyllic village with a traditional, rural feel at the heart of the Dolomites UNESCO World Heritage Site. Nature lovers and those looking for a peaceful getaway will be especially thrilled by the prospect of rest and relaxation that this small village in Val Badia provides.
Due to its stunning location at the heart of the Puez-Odle and Fanes-Senes- Braies natural parks, Badia is a perfect starting point for hiking and leisurely walks through the unique landscape of the Dolomites.
The parish church of San Leonardo and the pilgrimage church of the Holy Cross at 2,053 m altitude are especially worth seeing here. 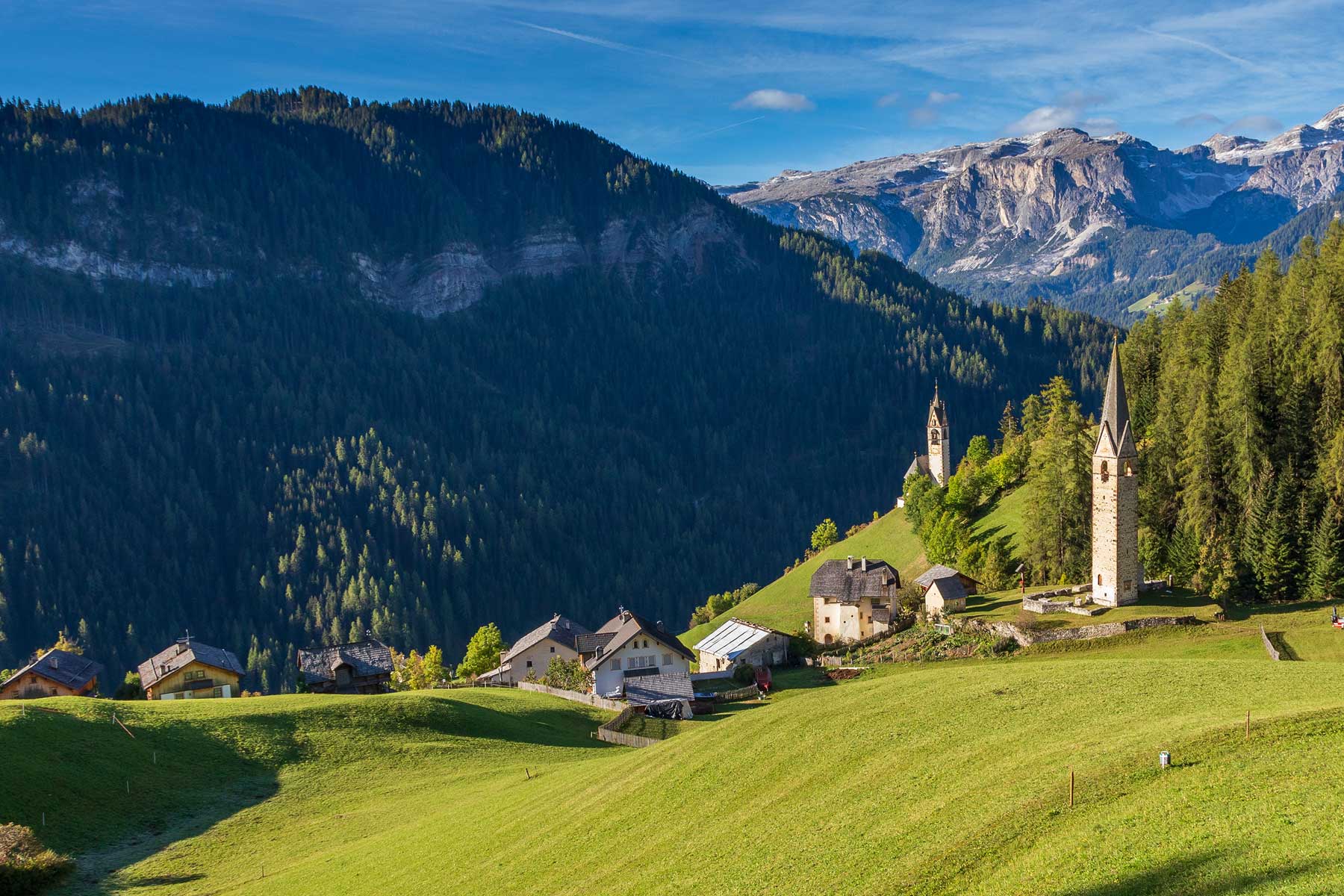 La Valle – 1,348 m
The idyllic mountain village of La Valle lies at the foot of the Sasso della Croce mountain and Armentara pastures, not far from the Fanes - Senes - Braies Natural Park and is therefore a perfect starting point for amazing hikes and mountain adventures in the Dolomites.
The smallest village in the Val Badia holiday region is particularly loved by hikers, ski enthusiasts and those looking for a peaceful time away due to its natural landscape and tranquil setting, as well as its geographical location between the two ski areas of Plan de Corones and Alta Badia. 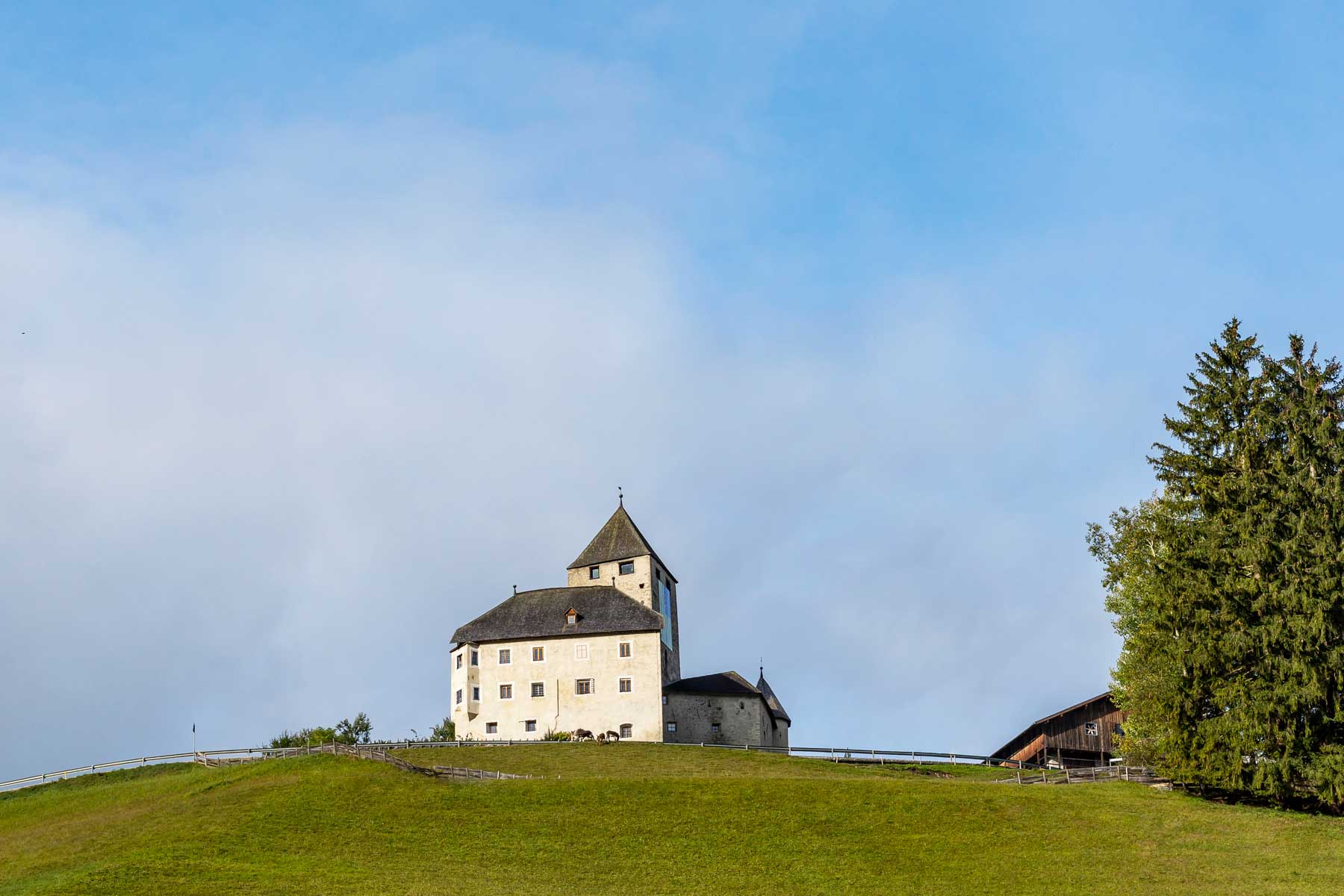 San Martin de Tor – 1,135 m
The 1,700 inhabitants of the municipality include those living in Picolin, Lungiarü and Antermeia and in several hamlets typical for the region (known as “Viles”), as well as inhabitants of San Martin itself.
This area, which includes the mountain Sasso Putia, the Puez-Odle Nature Park and the world-famous Dolomites, offers endless opportunities throughout the year for nature lovers, hikers and those looking for an active holiday.
San Martin de Tor also has a rich cultural heritage to share. The Ladin Museum in Ciastel de Tor and the Cultural Institute of Micurà de Rü, give an insight into the history and culture of the Dolomite Ladins. 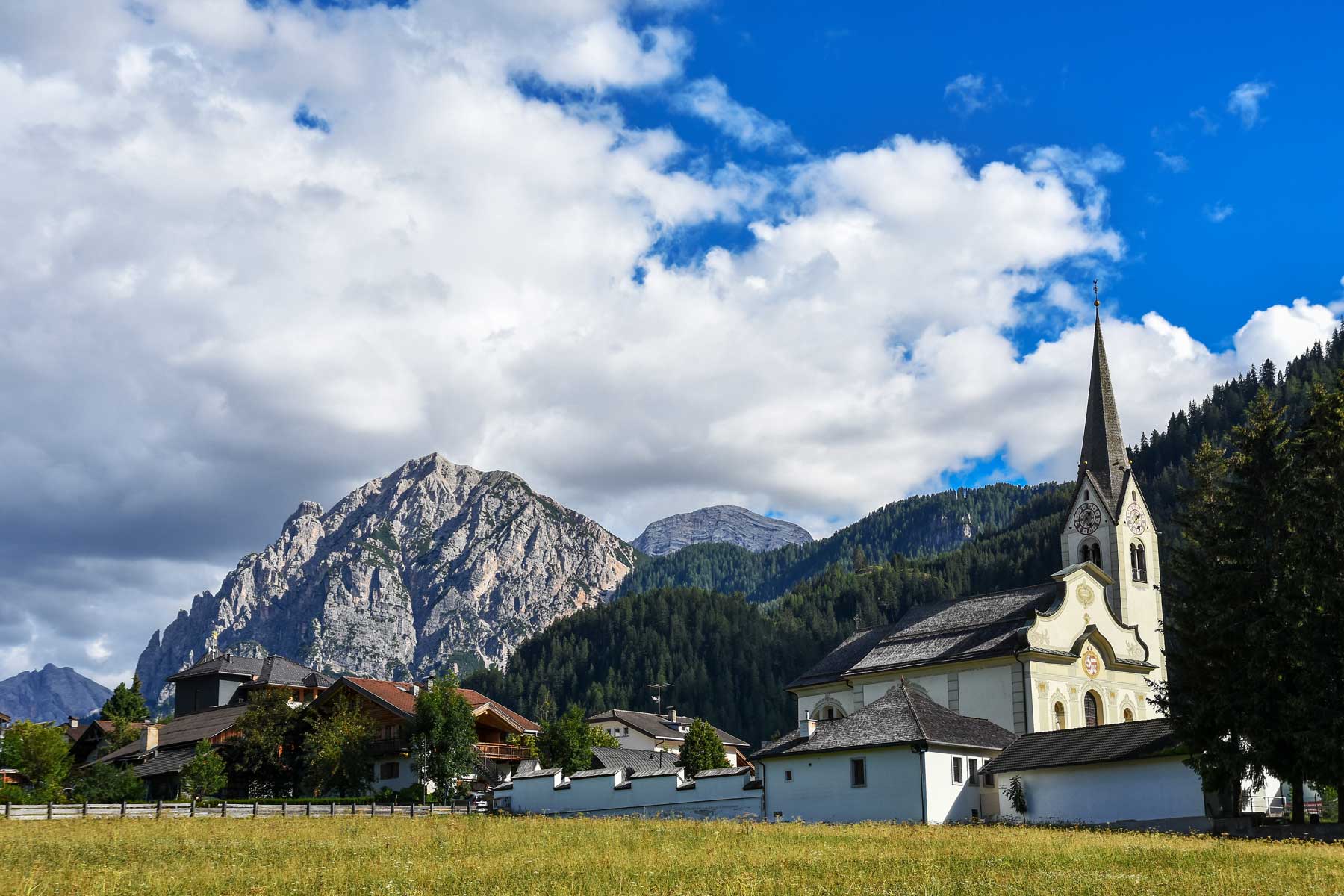 San Vigilio di Marebbe – 1,285 m
San Vigilio is the main village of the Mareo municipality in Val Badia. The village lies nestled in the Fanes - Senes -Braies Natural Park, which is perfect for walks, hikes and mountain bike trips through the unforgettable natural landscape of the Dolomites.
In winter, the holiday region, which is located in the Plan de Corones ski area, becomes a paradise for ski enthusiasts, cross-country skiers and nature lovers.  As San Vigilio lies apart from the hustle and bustle of major winter sport locations, it is possible to enjoy peace and quiet here and to thoroughly relax after an eventful day on the slopes.